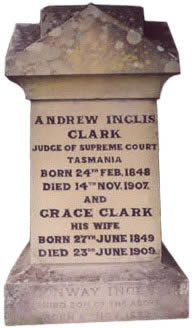 Clark has long had admirers, nationally and locally, among democrats and republicans. However, for many years, Clark's contribution was little known. In Tasmania, his  home-state, an unassuming headstone which once marked his grave stands at the corner of Nelson Rd and Peel St, Hobart.

Though the headstone is Clark's only tangible memorial, Clark's contribution to our democracy lives on in Tasmania's Hare-Clark voting system and since 2017 in the renamed electoral Division of Clark.

Commonwealth of Australia 2017, Electoral Commission for Tasmania, Redistribution of Tasmania into electoral divisions