I have followed very closely the constitution of the United States. 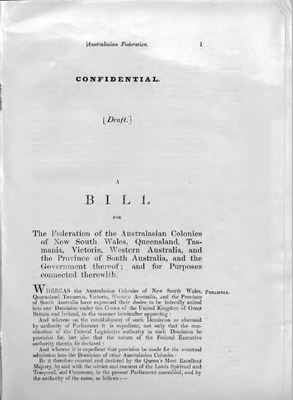 Clark was closely associated with the Federal movement in its early years. The Tasmanian Parliament elected Clark as a delegate on the Federal Council in 1888, 1889, 1891, and 1894 and the Australasian Federation Conference in 1890.

At the Federation Convention of 1891 his draft Federation Bill, which systematised provisions drawn from the American Constitution and the Federal Council Act, was warmly received by delegates from the other colonies.

In his 1891 draft, Clark described how the organs of central government would work and proposed a separate federal judiciary, which would replace the Privy Council as the highest court of appeal on Australian law.   A bout of influenza prevented Clark from initially joining fellow drafters on the steamship Lucinda, where his draft was tinkered with but not fundamentally changed: eighty-six of his ninety-six sections found their way into the 1900 version of the Australian Constitution. Clark's support of union waned and had turned into opposition. He apparently thought that financial clauses would act deleteriously on small States like Tasmania and withdrew from the Federation movement. Although this meant that his contribution to Australia's foundation document was not fully recognized, the order, form, substance, and American flavour of the Australian Constitution owed more to Andrew Inglis Clark than any other single individual.