Olive Pink spent most of her adult life living in Central Australia.

From 1942-1946 she camped at Thompson's Rockhole in the Tanami Desert, Northern Territory.

Olive's letter written to her friend Joan Walker in Hobart, describes her experiences living with the Walpiri at Thompson's Rockhole. Olive was a strong advocate for aboriginal rights.

From the Olive Pink Collection, Item 22 Letter from Olive Pink to Joan Walker

Olive Pink lived in an ex-army corrugated iron hut in Gregory Terrace, Alice Springs for 9 years from 1946-1955 after returning from Thompson’s Rockhole, in Warlpiri country near The Granites.

Olive created a garden around the hut and grew fruit trees, flowers and vegetables, much of which she sold to make a small income. When she had time she also painted cards with wildflowers and from 1952 she cleaned the courthouse. She managed to live on an income of approximately £6.00 a week - refusing to apply for the old age pension.

‘She divided ‘No. 2 Gregory Terrace, Home Hut’ into two sections. At one end she established her living quarters where she could sleep and work if it were cool enough. At the other she installed her collections of Warlpiri and Arrernte artefacts, built camp scenes of desert life, showed the plaster face masks of her Warlpiri friends, now painted in life colours, which had been made by the South Australian Museum at The Granites, and hung the 200 or so watercolour paintings of wildflowers seen on her journeys across Australia. This was her private museum which she opened on request, charging tourists [3/- or] 4/- to enter and those whom she liked, nothing at all. Those she did not like the look of found the museum ‘closed’ and were sent away unsatisfied.’ 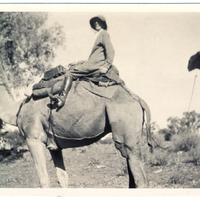