The Endemic Flora of Tasmania 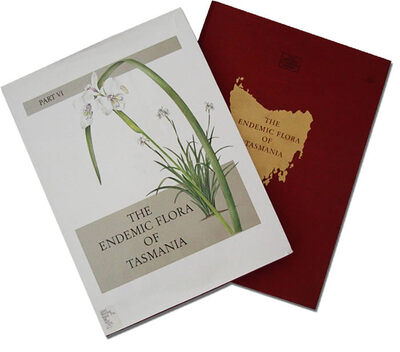 The Endemic Flora of Tasmania (published 1967–1978) was an ambitious joint project between Winifred and the acclaimed Australian artist Margaret Stones. It was conceived and sponsored by Lord Talbot de Malahide. Lord Talbot was an avid collector and gardener who cultivated many Tasmanian plants on his estate in Ireland. Margaret Stones was based at Kew and used fresh flowering and fruiting material. Some of this material came from Lord Talbot’s estate but much of it came from Tasmania.

Winifred wrote the descriptive and ecological notes that accompanied each illustration. She also verified many of the specimens sent to Kew. The paintings and the proofs were sent to Winifred for comment. Sadly Lord Talbot died when only four of the volumes were completed and the work was seen to its completion by his sister, the Hon. Rose Talbot. The Endemic Flora of Tasmania proved to be a great success and increased interest in and knowledge of Tasmania’s endemic plants. 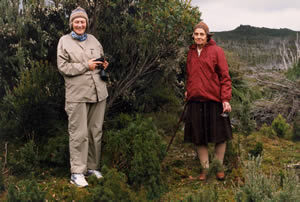 Lord Talbot blew into the department when we were in the huts…he was a very keen gardener and used to grow Tasmanian plants in his garden in Ireland and conceived of the idea of having a record in the form of paintings. And he met Miss Stones at Kew and asked her to do the series of illustrations of the Tasmanian endemics, and then decided he would publish in book form and asked me to do the descriptions.

He was a Baron, 13th Baron…you called him Lord Talbot until you got to know him and then I called him Milo, an extraordinary name but it’s a family name. It always reminded me of the evening meal, you know, we all drank Milo.